On the hot JBR Beach of Dubai hundreds of Ultimate players from around the globe congregated near the Hilton Hotel in their new shiny national team kits. Some teams had been up earlier today practicing and we even heard that the Indian Mixed team beat the Japanese in a training game (10-7), but smiles were seen all around with friends from afar meeting and greeting. Even the GH crew couldn’t move 10 metres without catching up with friends.

After the lunch provided by the tournament everyone came together and, starting with Australia, followed the fantastic Patrick van der Valk to the show pitch. Each country was welcomed into the arena with big shout outs for the newer members to the WFDF family: Uganda, Kenya and UAE; our esteemed hosts.

With almost every player and many a volunteer seated speeches opened the tournament. These were from the local organizing committee, van der Valk and most notably a representative from the Emirates Medical Student Society who talked to the crowds about International Women’s Day.

International Women’s Day is held every year on March 8th and this year lines up with the opening day here at WCBU. The very first observance was held in New York 1909 and the next year made official at the International Women’s Conference and now over 100 years later we have celebrated here in Dubai.

We were handed out the purple ribbons from the Local Organising Committee and they were proudly worn by all. Ultimate stands in a unique position of attracting both men and women and, even with the recent discussions about the state of Women’s ultimate, a lot can be said for how accepting our sport and community is. 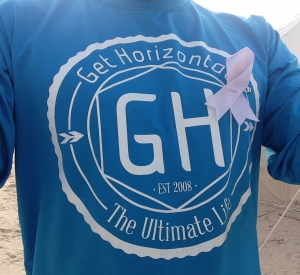 We were reminded today of this fact and that “opening ears and eyes will unlock doors” for women all over the world. Ultimate can be the key to that door and the show case definitely gave us all an exciting view of the state of Women’s ultimate with a thrilling game between USA and Germany.

So with all the speeches done and a arousing rendition of the UAE anthem play began in the World Championships of Beach Ulimate 2015, the fourth edition of this tournament. Good luck to everyone and stay tuned for more Beach Tales.

Beach Tale by David “DP” Pryce from Get Horizontal. Photos by Claudia Pfeil.