As players we love the way in which a frisbee flies, the huge plays, the tactics and the simplicity of the sport. As people we love the idea of Spirit, self-officiation and often most importantly the sense of community. The ultimate family.

Here in Dubai is no different. We see friends of 10, 20 or more years meeting up again after years apart recalling stories from tournaments in every corner of the globe. There have been brothers on the same team (see Alex and Max Thorne on Pitt), sisters (see Qxhna and Rohre Titcomb on Team USA here at WCBU)  and siblings on the same team (see Adriano and Francesca Scarampi from Team GB Mixed Beach at ECBU) but until yesterday I had never heard of parents playing for the same team or nation. To my even bigger surprise the team of interest (UAE) have two parents groups. With a mother/daughter pair on the Women’s team and a father/daughter pair in the Grand Masters and Women’s team respectively.

I spoke to them all about playing the same sport as family and their WCBU experience. Firstly Andrea and her daughter Laura Bombala from the Women’s team 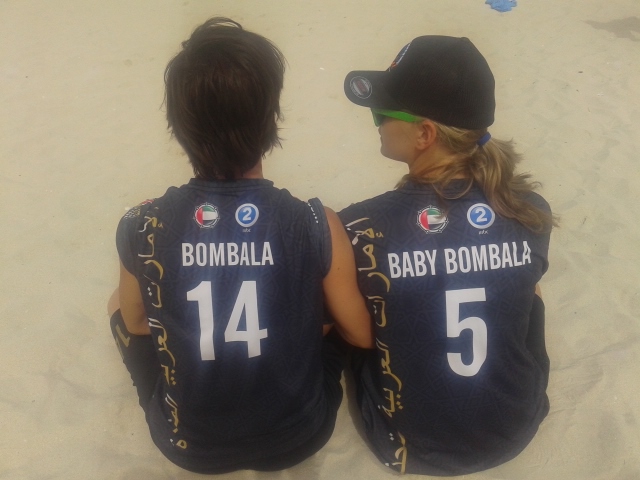 Mother and daughter on the same team! Photo courtesy of Andrea Bombala.

This team have only been around for a short while, how did the team come about? Amie Channon (SYC and GB) [ED: recently immigrated from the UK to Dubai] is the reason we have come together and she has made it amazing. We have only been around 4 months, discussed before last summer and then Amie put out an appeal. Only been practising for about a year.

How did you guys come to the UAE? We moved here 10 years ago, due to my husband’s job. You only played pick up right?

You hadn’t played in North America before? Not in Canada, no. Never. But a Canadian family friend suggested it and in Safa Park we started going together on a Saturday morning even when the kids were little. Adults would play frisbee and the kids would go play on the play equipment but that was just pickup. Then I started playing in the league where I picked up a team. We had a few away tournaments on the mixed team, but it’s been nothing near to this experience. About 8 years for me and a very very late start.

How did you start Laura? I have always gone with you [Mum] to pickup and learnt how to throw. But I didn’t start playing until this team. Amie has helped so much. I wouldn’t be where I am without her.

What’s it like having your mum on the same team? …[after a little giggle from both]…It’s nice, it really is. It’s fun. I like this opportunity, because if we were anywhere else in the world we probably wouldn’t play together, we wouldn’t be in the same division.

No not at all, this has been amazing and I will answer what she is not allowed to say. When Amie approached me about a Women’s team and also suggested Laura as a potential player I said “You’re the coach and you have to handle that, I can’t be her mum on the field.” Everything was great probably until today, in our game today I turned into THAT team mate where normally I would be fine.

So there was a disagreement on the field? No problems like that, just the screaming on the sideline today [ED: don’t worry fans it was totally fine and in jest]. But seriously, the girls have been awesome. They have taken Laura under their wing and we have really been team mates. It’s been really cool.

Has it brought you closer together? We get along really well already but this experience; the training, this week, playing other teams from around the world I am over the moon that I get to do it with you (Laura).

How has the experience of WCBU been for you Laura? You meet so many people from all over the world, doing something you love, which is so cool. Yeah and you (Laura) have already found all your people for trades, we shaded up with the Canadian team to get some jerseys. Having my daughter start playing a sport in this community is the very best. This is the one for best people, Spirit of the Game and she has it all ahead of her.

And now the wonderful father and daughter pair of Gus and Monica Saade from the Grand Masters and Women’s division. 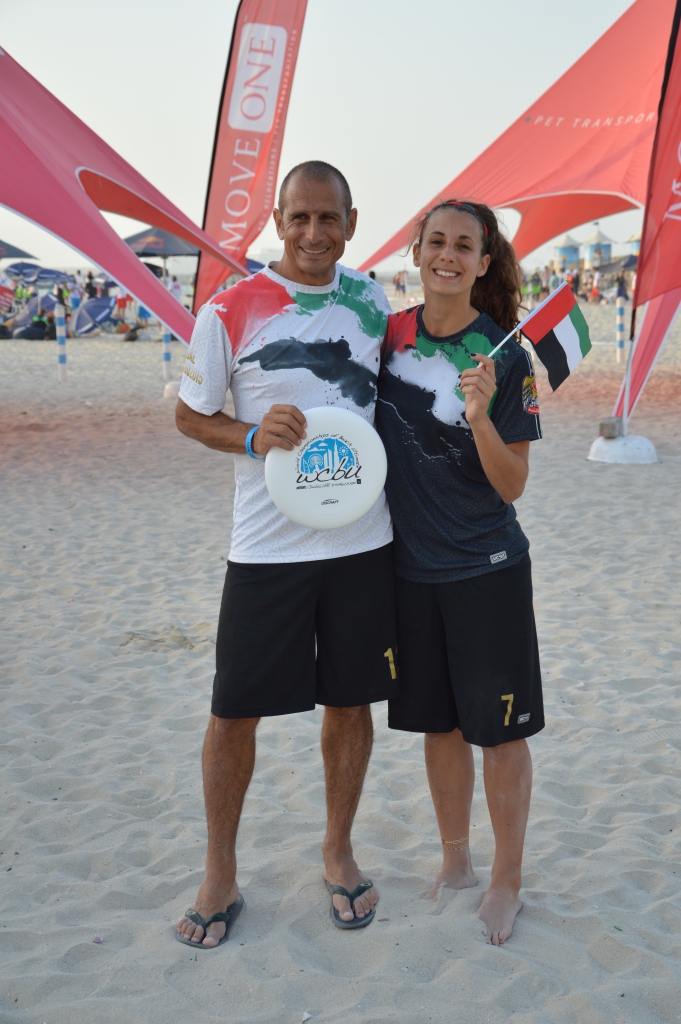 Gus and Monica after a long day on the beach.

How is it having your dad around and playing for UAE at this tournament? Oh it’s awesome. Actually he is one who got me into Frisbee about 10 years ago. It’s funny because he first introduced me to it, and I just couldn’t pick it up. I was frustrated because I didn’t pick it up naturally and he asked me to stick with it one more time. I went from frustration to obsession. Oh she is totally in love with the game.

Did you learn to play here in Dubai? Yeah, we moved out here and I grew up here. We have been here since 1996 so that’s 18 years and you [Dad] have been playing that whole time, right?  Yes but I started in college. I just loved the game, and used to just toss around. But never got to play in the team, until we came to Dubai. Here a friend of mine introduced it to me and said that they do actually have ultimate frisbee and that was at the American School of Dubai. I went there one day and since that day never looked back. I make my travel plans, my family plans and everything around frisbee. So does Monica. Around Tuesday and Saturday pick up. When Monica came on board I tried to get her to play and she fell in love with it. So that when she went back to the States she played some intra-mural while I played even more. When she came back I could clearly see her passion and obsession.

How has that developed to what we see at WCBU? It’s been amazing how we have gone from being so excited about Tuesday and Saturday night pick ups at our local high school to representing the UAE in a World Championship. It’s just amazing that Dubai was able to pull that off.

Everybody used to say that I looked really comfortable playing with my Dad, because he was the one who introduced me to it and he is my Dad so it became natural to look for him on the field. So it’s been nice to evolve from just dumping it back to my Dad to now being able to represent the UAE Women’s team and be able to make my own plays. But really it all started with him.

Do you think it has brought you closer together? Absolutely. She also has a brother who plays so all three of us are on the field playing. It definitely brings us together. We basically talk it, breathe it, live it and fight it. It does create some heated discussions on the field because we are so hot and we can just talk to each other like you wouldn’t normally talk to other people because of the respect. But because we are father and daughter sometimes you can get to each other, however when things are going well it is truly great. It’s definitely united us. Obviously there is so much to do in Dubai and things get really busy but we know we can always count on those Tuesday and Saturday nights playing pick up together.

What is the current outlook of ultimate in Dubai? We have a great group out at pick up and it is expanding. Every season we get more and more people coming. The interest in frisbee has just picked up so much here which is awesome to see. Without those people and especially Amie Channon we wouldn’t be here, she is phenomenal; an amazing player. With Sam Bowen moving out there might even be a mixed team on the horizon.

And the future of UAE Ultimate? When I started 15 years ago we had about 12 players consistently coming now that has grown to a couple hundred players in the UAE, which is amazing. Ultimate frisbee was a lesser known obscure sport but now when you say Ultimate Frisbee a lot of people seem to know about it. We are quite excited about the future. Due to the non-contact part of the sport we have guys who are like 60 years old and still playing

Thank you guys and I look forward to seeing you all at the next Championships.

This Beach Tale on Family Day was brought to you by David “DP” Pryce from Get Horizontal. Feature image is courtesy of Scott Roeder from UltiPhotos.com.