Tensions rise in an open semi but spirit prevails #BeachTales

Tensions rise in an open semi but spirit prevails #BeachTales

As you may have seen on the livestream or VOD, the Philippines were defeated by USA in the open division semi-final on universe point in incredibly windy conditions. The game was back and eventually reached 7-7 with a game to 8. After a few turnovers each way, the Americans had the disc on their defending endzone where Mario O’Brien unleashed a huge backhand huck that was received by Tyler Degirolamo. It looked like game over, but the Philippines had called a travel on O’Brien and after a bit of discussion the disc went back. O’Brien decided to stick to the game plan and unleashed a huck again, this time to Asa Wilson but Degirolamo’s defender, Kristian Guerrero, called a foul on him and claimed that he may have had a play on the disc if it wasn’t for that foul. Here there was disagreement on what was going on and O’Brien decided to call a spirit time out.  Here the captains and spirit captains got together and discussed the call and eventually decided that both teams simply disagreed and sent the disc back.

After a few turnovers and one more travel call, the US finally were able to put away the game and punch their ticket to the finals. I went to the spirit circle to see what the teams had to say about the game and everything there was positive with both teams hugging each other in a beautiful display of emotion and respect for each other. However, I wanted to give the readers out there a closer perspective on what happened, how the spirit time out transpired and what spirit is like at the highest levels of our sport. I talked to O’Brien and Philippines captain, Jude Lee about their perspectives on the game. 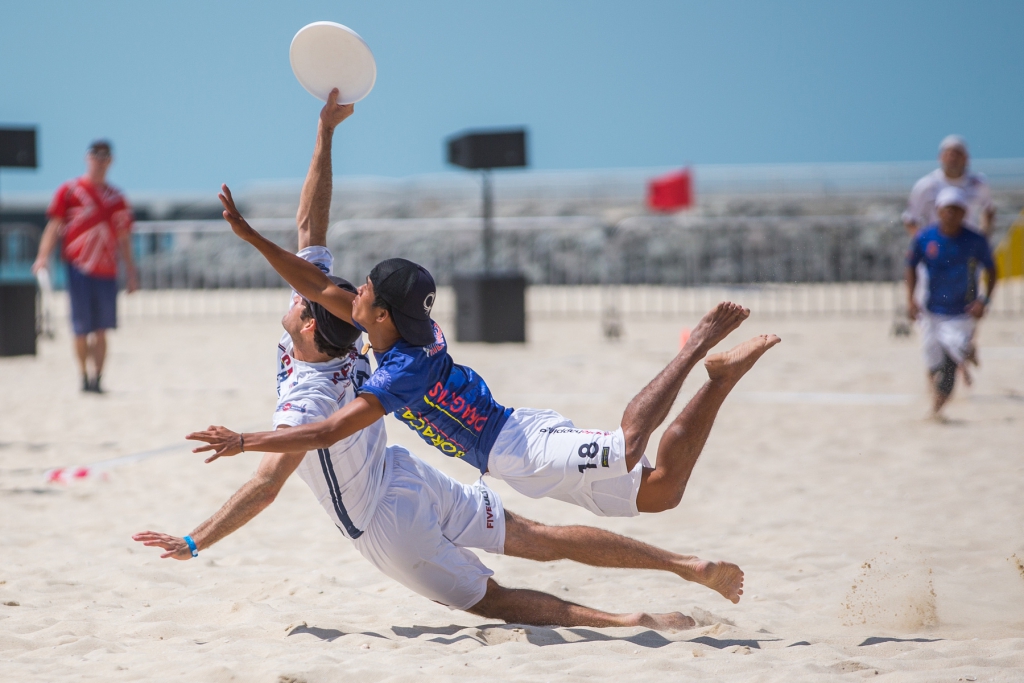 When the calls were made I was really proud of both sides in the way that they communicated. In situations like this it is really hard and we dealt with it the right way.

What was exchanged during the spirit time out?

I thought it was a great interaction. The spirit captains and the captains got together and we could say “my player thinks this” and they could say “well my player thinks this is what happened.”  We agreed that we disagreed and in that situation the way the rules of our sport work the disc goes back and both teams understood the other team’s perspective. We understood what their player was saying and we understood what they were saying and the resolution we came to was send it back because that is how our sport works so we sent it back.

How do you feel about this system compared to what you are used to in the US with observers and refs?

I don’t think either one has it right yet. I don’t think we have the best system yet and we need to keep working towards it.  On one hand we have the US where there are full on active referees and on the other hand we have no third party here. I think what is best for the culture of our sport is somewhere in the middle. I think we need to keep working on it.

How did Team USA feel after the game about spirit in the game?

Our team was admittedly very emotional in the game and we acknowledged that the other team was emotionally invested in the game. We were frustrated by some of the calls and that is okay, but that happens.  We self rated ourselves and talked about how we could do better in terms of how we handle reactions, not necessarily about the calls. None of our players thought we were making inappropriate calls. We felt frustrated and we feel like we could have done better and want to improve on that.

In terms of the other team we get it.  I am guessing that they felt the same about us.  I don’t really know, but I was really proud of the communication, especially during the spirit timeout.

How are you feeling now that you have to take on GB now?

I think this game helps us. We haven’t played a game yet this tournament where we were pushed to multiple limits. We had some tough games, like against Canada, but we had control of the situation. In this game a lot of things were outside of our control. One thing we talked about was playing this game with grit and staying positive even when things go wrong. We haven’t turned the disc over a lot and before the game we just said “We are going to turn over the disc a lot. Just get used to it and be ready for that.” This experience definitely helped us for going into tomorrow. 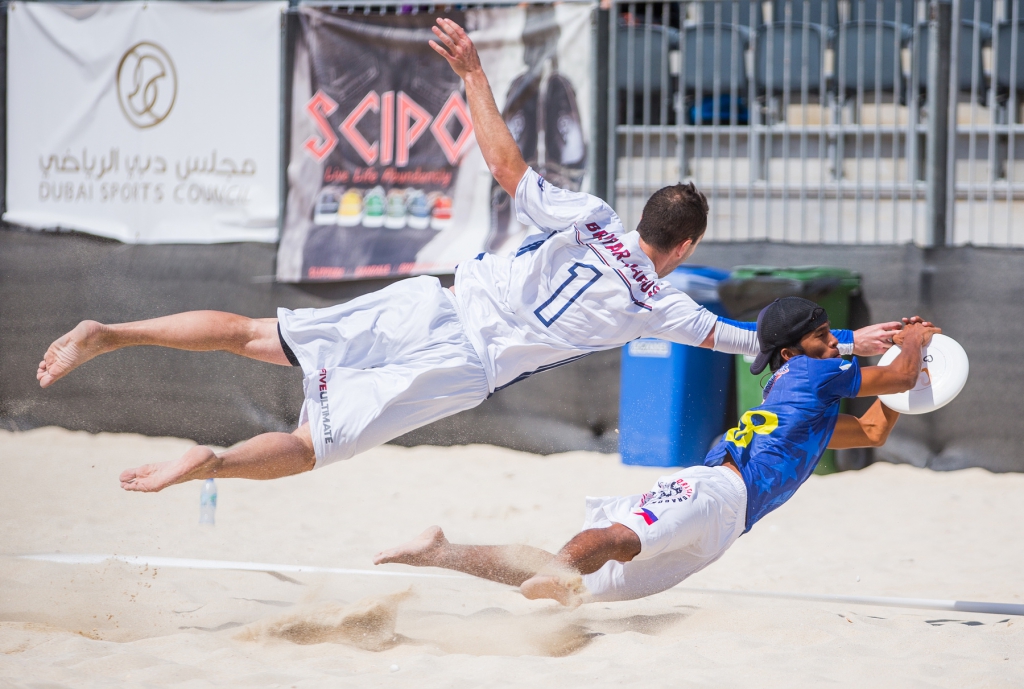 Can you give some perspective on what happened in some points and how your team responded to that?

In a lot of points, especially when it is really competitive people pay more attention to make sure you get every thing right.  When the scores are really different you can maybe let little travels and things go, but when you play tough teams and you know things will be hard, you tend to call things a lot tighter.

Can you talk a bit about the spirit time out and what happened and how it got to that point?

I was okay with the way things were being called.  There were a lot of disagreements but at least spirit-wise, people were following the proper protocol.  You discuss and if you can’t agree that is fine.

Maybe they called a spirit timeout because they thought there were a lot of calls.  There were a lot of these situations in the game, but they called it in the end.  I don’t know what they discussed in the spirit circle. Their captain and our captain were involved in the call but we never rejoined the circle because I wasn’t there.

Do you think the situation was helped by the spirit timeout?

How did your team feel about the spirit of the game afterwards?

Well in the end we were still really positive. I think the calls went both ways.  he spirit was fine.  When you reach this level of competition the calls get a lot tighter, but we were really happy with how they went. They listened to our side, we listened to their side. Maybe because people watching may have seen a lot of calls they think that something more was going on, but sometimes when your opponent is contesting there is nothing you can do.

How do you feel about the Bronze medal match tomorrow against Canada?

I know why they are excited.  Last worlds they were up 10-7 game to 11 and we came back and won.  I guess they are looking forward to a rematch.  We are definitely looking forward to the challenge.  We just want to get as many tough games as possible.  We went to universe with Australia and here with the US.  I expect the chance for some really high quality ultimate.  That is what we came here for and we expect that tomorrow.

What do I think?

The reason I wrote this piece is that I talked to many spectators about the game afterwards and there was a lot of anger towards one team or the other depending on what side they were on.  Some people were saying the spirit was terrible and thought that a game going to the point of a spirit time out is really bad. However, I think it is good to really get a deep perspective and see that things really did go okay for both teams. They were hugging each other after the game, they were all really positive and even though emotions ran hot and it did come to the point where they couldn’t agree they were all okay with the rules and just played on.   On the livestream the commentators talked about how there is a compromise here between really exercising conflict resolution and how important that can be and the spectator perspective on things where spirit time outs make for bad TV and could affect time slots.  This game did push back the next round of play for instance.

I think that this was actually a wonderful display of spirit. I was really impressed with both teams.  The composure that people brought to such a high tension situation and the way both teams treated each other after the game showed me that we really can have spirit of the game prevail even if the stakes are high and disagreements show themselves. I hope this deeper perspective can shift your mind a bit towards that if you thought what happened in this game was unacceptable.

This Beach Tale brought to you by Ravi Vasudevan of Get Horizontal.  Photos by Scott Roeder courtesy of Ultiphotos.