We all know about the dominance of the United States in Ultimate and going into this morning’s game, the GB Women had ignored the script and were ready to take it to the states. Seeing them warm up, and early in the game, I saw a large amount of confidence from both squads.

The first couple of points went back and forth till 3-3 with USA on offense. There were a couple contested calls but USA eventually turned over giving GB the chance to break again. They took it. And breaking again the next point forced USA to take a timeout at 5-3 to GB.

Even with the Brits capitalising on every turn USA gave them, their opponents fought back to 6s and took half. After the game I spoke to Rohre Titcomb, of team USA and Seattle Riot, and she commented that many turnovers in the first half came from “…indecision around the disc, the classic ‘you throw there and I cut the other way’ and that was in part caused by GB playing very close and physically on D. The heat and heavy legs were a big factor for our slow first half.” 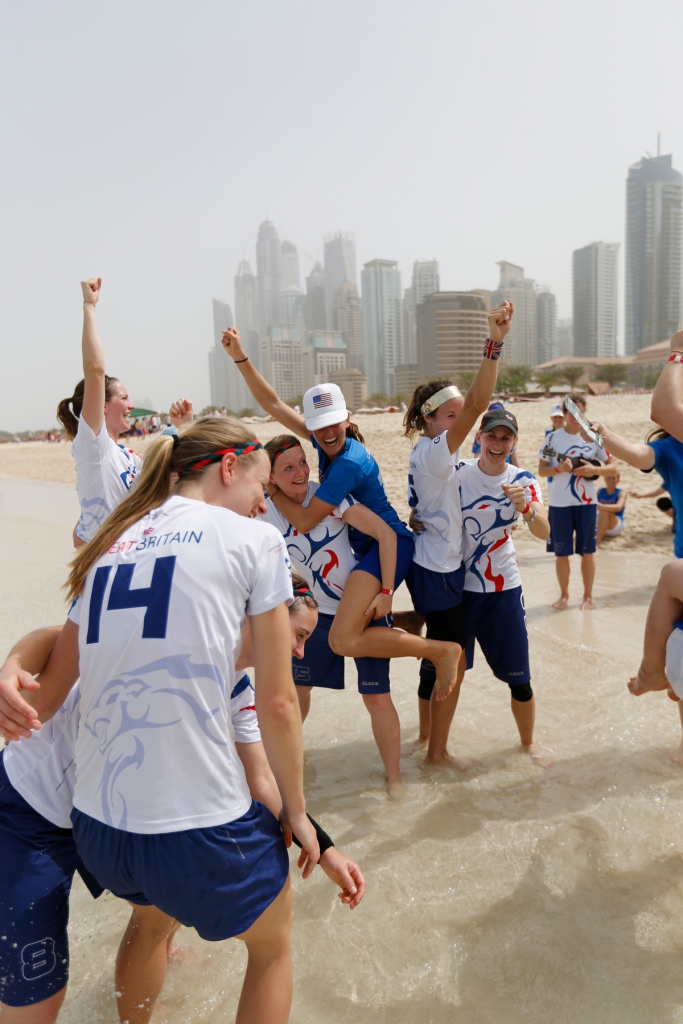 Team USA and GB enjoy the sea together after a hard fought game. Photo courtesy of William “Brody” Brotman of UltiPhotos.com.

Typically, when playing a North American team, European teams tend to stay level in the first half but the strength, depth and experience of the powerhouses of our sport means that they make adjustments that the Eurozone squads struggle to keep up with. At the start of the second half this new strategy could be seen from USA: “…we got a little more flexible with who we were playing on the field and changed the tactics on defence.” Initially this worked well with some quick goals but when the USA overthrew a couple options or dropped GB could be seen pushing the disc forward quickly and the new poaching look from the Americans forced the British to swing and be patient: a game they were happy to play.

In the latter stages of the game USA had held onto their previous breaks (10-8) but yet again GB were not sticking to the history book and began to really push back. In a similar vein as the rest of the game they took every opportunity to score and USA now under pressure to finish the game were rushing slightly and after Ania stole back the disc from a poach D starting moving the disc with quick successive passes from one corner quickly to the diametric opposite one for the goal and forcing universe point.

USA came out on O and with some very smooth flowing offense isolated cutter after cutter to score the final point and take the game.

Rohre was very pleased with the win and said that GB gave them their “toughest game yet.” Spirit seemed fine and while “calls were made they were discussed calmly and fairly by both teams.” Looking forward, Rohre couldn’t call out exactly who would make top 3 but she thought that the fight for semis would be between “us, and then any of Canada, Russia, Germany and GB.” And this afternoon GB beat Russia in a rematch from ECBU by two after scoring the final point twice in the same manner. This makes tomorrows games all the more exciting.

The women’s division is really hotting up so stay tuned for that and we are seeing a glimpse of the rest of the world Closing the Gap.

This Beach Tale was brought to you by David “DP” Pryce from Get Horizontal. The featured image was taken by William “Brody” Brotman of UltiPhotos.com