Canada Open steals another universe point game. This time against the Aussies #BeachTales

Canada Open steals another universe point game. This time against the Aussies #BeachTales

In a very similar story to their matchup with Russia yesterday, Team Canada showed that just because you are up by few points on them, it does not mean that it is over yet.

Australia went up early in the game with a few breaks and had a buffer for quite some time until things went back and forth for most of the remainder of the game.  All of a sudden it was 11-9 for the Aussies and the cap went on with a game to 12.  Canada started on offense and managed to score to bring it within one.  This gave Australia two chances to put the game away from an offensive start, but both points had the Aussies throwing an ill advised long throw with the Canadian defence really clamping down on the under cuts and keeping huge intensity for the deep throws.

On the final point there were a couple of contentious calls.  First of all Rumi Tejpar had a travel called on him that he did not agree with.  The Canadian sideline was also having none of it and eventually convinced the Australian player to retract it.

Finally Antoine Genest threw to Calum MacKenzie who made a really nice grab under contact for the win. However, there was a long discussion as Kendall Thorn asked for confirmation of whether the catch was legitimate or not.  All of a sudden there were a lot of angry voices talking each other down, but Thorn eventually said, “Hey guys, I am just asking him if he is sure he made the catch”  MacKenzie said “I think I got it” and Thorn replied very calmly with “Fine, then it’s a goal” and Canada took the game 11-12. 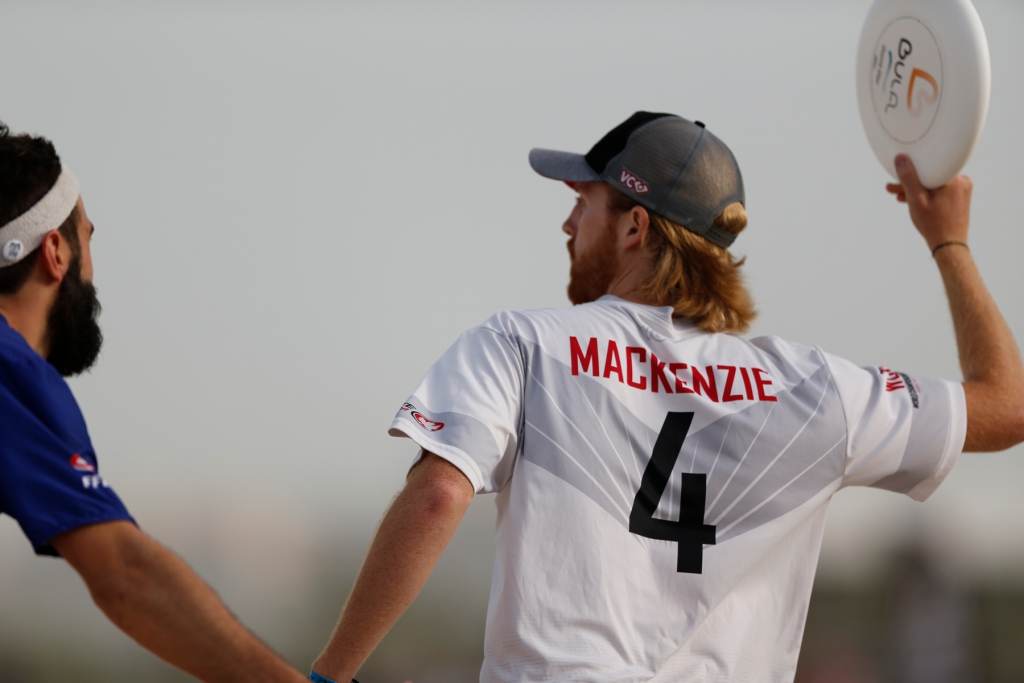 Both teams seemed very happy with the level of intensity and grit that they saw from each other.  Captain Alistar Don mentioned that “These are the games we come here for” in the spirit circle.  Of course they were disappointed in the result, but they would love to see the Canadians again.  Legendary Furious George player, Andrew Lugsdin, said “[Australia] could work it up patiently or make big strikes.  In the end we know how to grind it out and a few things went our way and we were able to pull through.”  After the game he spoke with me and said “We got one break back three quarters of the way through and then a couple at the end that gave us the game.  We didn’t really make adjustments, we just played a bit harder and bit tighter to ramp it up against an offence as good as Australia’s.  In the last part of the game desperation took over a little and we played harder on D and put more pressure and capitalized.”

Another Australian player who I didn’t catch the name of stopped by and told me, “Strategically our stack needs to be a bit shorter especially against a team that marks under.”

The opinions of the two teams differed on how spirit went in the game.  Lugsdin said in the interview, “It was a spirited game with two teams playing hard and playing to win.  I don’t feel there were any spirit issues at all.”  Australia on the other hand mentioned to me in the post-game interview that the reactions of the Canadians on foul calls were not really appropriate.  “This was probably our least spirited game because when calls did happen their reactions were quite aggressive.  They also had a few teammates always chipping in with bits and pieces.  The contact in general was fine, but the way that their teammates jumped in on calls.  But it was definitely a fun game, just a shame that the reactions went this way.”

Finally I got a few words with Andrew Lugsdin about the state of ultimate and what it was like playing in his first real competitive beach tournament with a national team.  “I think having a beach world tournament like this is amazing.  I have been coming to world ultimate tournaments since 1994.  It is awesome to see countries like Qatar, Kenya and India out here.  This is amazing for the sport of ultimate.  I saw the Philippines playing and they play amazing on beach.  I am very excited to play them later.”

This Beach Tale brought to you by Ravi Vasudevan at Get Horizontal.