This is team Uganda’s first trip to a world championship event and even though only one day has passed, they can go home saying that they won a game on the world’s stage.

Today they had a tough start playing against some very seasoned and competitive teams in Germany and the Netherlands.  In both of these games they tried their best to keep up. They just ended up falling to the pressure teams brought .  However, the third game of the day would be a different story.

In the third game they faced the Czech Republic, who just came off of a universe point win against Great Britain.  This game proved to be really close with Uganda going up by 1 or 2 points and the Czechs equalizing and coming back.  Eventually the cap went on and the Czechs brought it to universe point at 11-11.  Uganda went on to score the final point and claim their first victory in the history of any Ugandan national ultimate team.

I talked to their two captains, Kwesinga Joseph and Inez Charity after the game to get their thoughts and how things have been going at the tournament so far. Joseph has been playing for 4 years and claims that the inspiration and team spirit has caused him to love the game more and more.  Charity started throwing a disc around 14 years ago but didn’t start playing competitively until her teen years.  She had never thought about bringing Uganda to a national stage until the WCBU of 2011 but, sadly, they did not manage to bring team Uganda to that tournament. 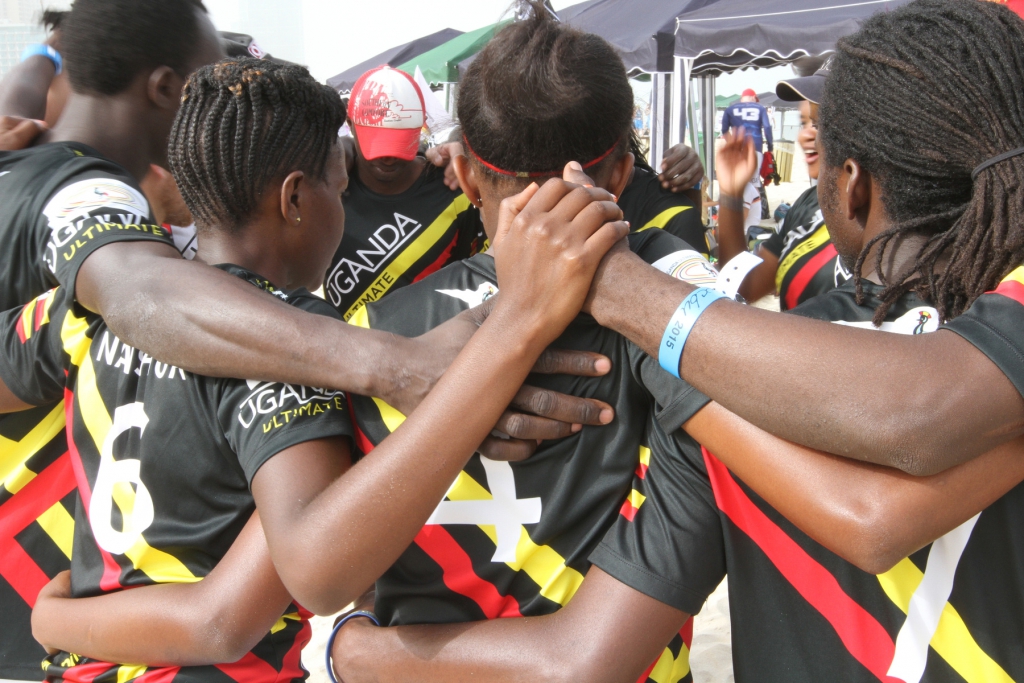 I asked the captains how the first two games against tougher opposition went.  Joseph told me, “It’s our first time at worlds, and our guys were pretty nervous.  We have played some tournaments in East Africa but nothing at this level.  We have a tournament platform in Uganda called 7Hills.  When we came out to face Germany we were a little bit nervous.  It’s not that we can’t play but we just didn’t know what needed to be done and were a little shaky.”

When asked about the game against the Czechs and their first win, Charity told me, “The game went very well, it was very competitive.  After Germany and the Netherlands we got our rhythm and figured out how worlds actually works.  We got our system in check and our lines set up and then we put everything on the line and left nothing behind.”  She added later that “The Czechs definitely gave us a run for our money.  I feel like we brought it and they brought it even harder.”  Joseph also chimed in and said, “Of all the games we have played, this has been the most awesome game.  There were few calls and their spirit was great.  This was definitely the best game for us [so far] and that is not just because we won.”

The Ugandans seem to have improved with each game and are very excited to keep improving in this tournament.  However, Charity is already looking further in the future.  This year Uganda fielded a mixed team for the WCBU which is a huge step but she thinks that “hopefully one day Uganda will have a team in each division.  This is my dream.”

Well WCBU seems to be the place where dreams can come true and more dreams can form.  Congrats to Uganda on an amazing first day of competitive play on the world’s stage.  Stay tuned for more Beach Tales tomorrow.

This Beach Tale is brought to you by Ravi Vasudevan of Get Horizontal.  Featured image by William “Brody” Brotman of Ultiphotos.