An historic event has occurred today on the sands of Dubai! The Open team from India have taken a win in their second World Championships of Beach Ultimate. They started today with a game against GB and were clearly outmatched (1-13 loss) but almost scored a callahan with one of their incredible young and fast players.

Their second game was against the team from Singapore and it was a much closer affair. Sadly we were not able to watch but we spoke to Amberish Jaipuria from the Indian team about the game and what it means to the team: “it was a really good game for us…it was amazing, I am the only player who is still playing from the last WCBU and I got a little emotional if I am to confess, it’s really special.” 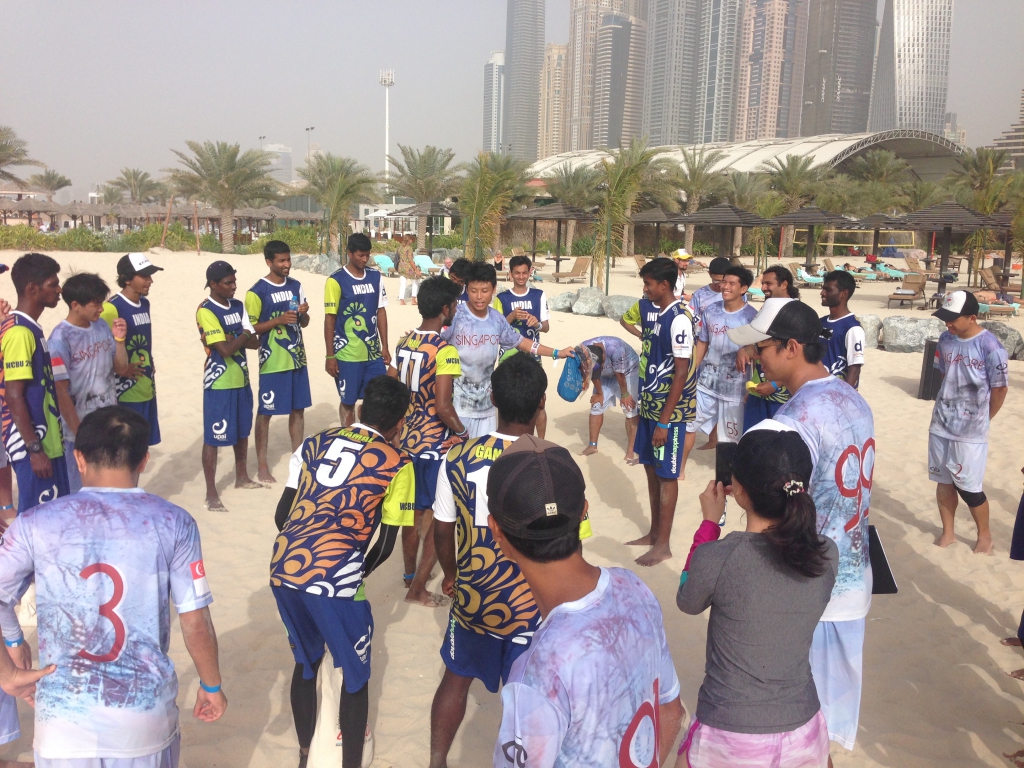 Singapore couldn’t select a stand out MVP so India had to dance off for it!

Preparation was key to their win, as many of you may know the story of Chennai ultimate was shared with the world and taken to the Sundance Film Festival to great success. Indian Ultimate in the last four years has grown immensely. Amberish gave us some insight into the work ahead of Dubai with “… every single player on the team has been working so hard. We picked the team about four months ago and have been trying to practice once or twice a week since most of the players live in once city (Chennai). The rest of us have been commuting down at least once a month. It really shows in the end; the team are playing well together.”

For those of you who have seen the Sundance film you will know how Ultimate has had such a positive effect on the lives of many and this is reflected in this team. You can see when they huddle, when they are in the spirit circle and after games “…more than anything the team has a really good culture about it, a great atmosphere. We are always so supportive … we were charging on in between scores as much as we could, really enthusiastic. We are so happy to be here and getting a win has made this experience even more special.”

Amberish left us with an awesome fact that here in Dubai “…three of the boys from the film are actually playing on the team so make sure to tune into the live stream to see them playing [10:00 UAE time], who between the three of them are carving up the MVP awards. So these boys have earned their spots on this team and showing us what they can do!”

I personally look forward to seeing what they can do and hope they can get a couple more wins. Watch out world!

This BeachTale was brought to you by David “DP” Pryce from Get Horizontal.