Yesterday I told you guys that Russia was the team to look out for this tournament.  However, in sports things can shift at any second and the unexpected can happen at any time.  While many people were watching USA defeat Canada, or Great Britain take down the Philippines, Kenya decided to shake things up in open pool A by beating Russia in a universe point situation.  Kenya, like Uganda, is attending worlds for the first time as a national team. 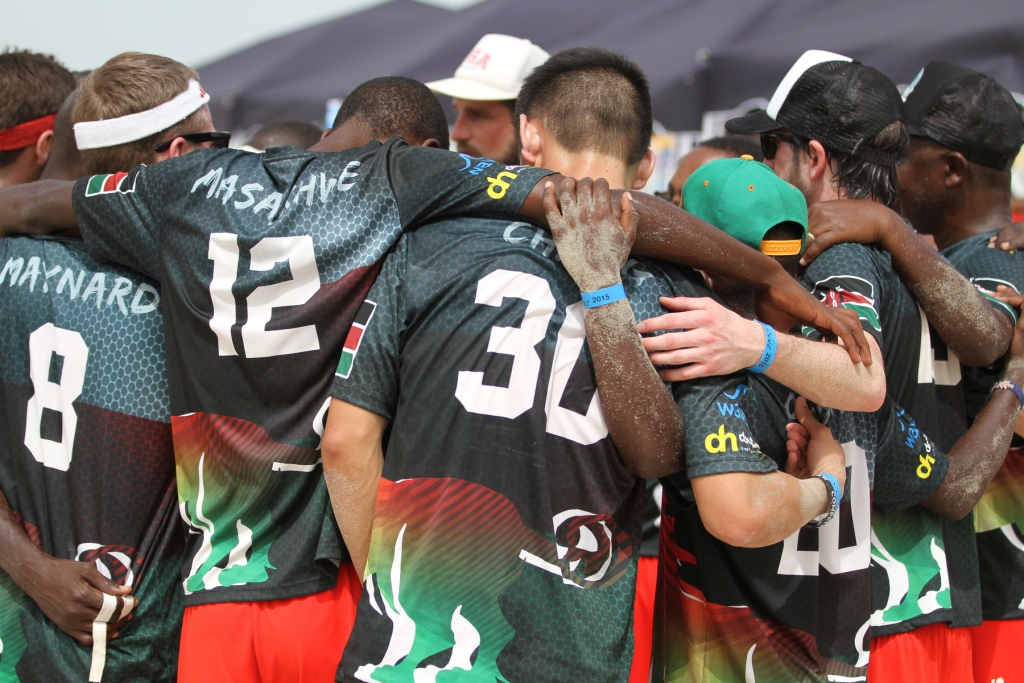 Kenya in the circle. Photo courtesy of William “Brody” Brotman

I got a chance to talk to a few of the players after the match to see what they had to say.  John Waitumbi told me that “All through we’ve been very motivated.  We knew that it is hot here and these guys are from Siberia so we can do this.  We have just started to grow that an old guy like me can play with the young ones, I should be playing grand masters.”  He says they owe almost everything to captain Michael McGuirk who has been adding a lot of professionalism and hard work to the trainings leading up to this tournament.

Steven Chang said, about the Russian game, ” I think for the most part in the beginning we were trading points 7-7.  At one point we got some breaks and went up 11-8.  We were really tired as this was our third game so they ended up catching up to 11-11.  They took a timeout to gather themselves but that actually gave us a chance to rest and put out a nice and calm line.  Kyle McPheron put up a beautiful break side huck… it worked and that was all she wrote.”

You could see that these guys are really enjoying this victory.  They are now ranked 3rd in their pool though they will have to take on some tough competition.  They don’t seem terribly concerned with results and just want to make the most out of this occasion. Mike Malloy said that his main goal was to “have the most fun of our lives here.” Waitumbi exclaimed “Watch team Kenya. It’s coming!”

Kenya is currently ranked 3rd in their pool

We will heed that and make sure to include at least one Kenya match in our games to watch tomorrow.  It seems that Africa has really arrived to this tournament and that is a truly amazing thing.  Who knows, maybe they will become the next Japan or Colombia and start shocking the ultimate world in years to come, but for now they are doing solid and having a a blast doing it.

This Beach Tale was brought to you by Ravi Vasudevan of Get Horizontal. Featured photo courtesy of Raf Celis.