Pools are all done, it is time for the knockout stage.  Check out all the standings here.  It is time to see what teams can manage in do or die mode.  I look at mixed, women’s and open and tell you a bit of what to expect for each one. 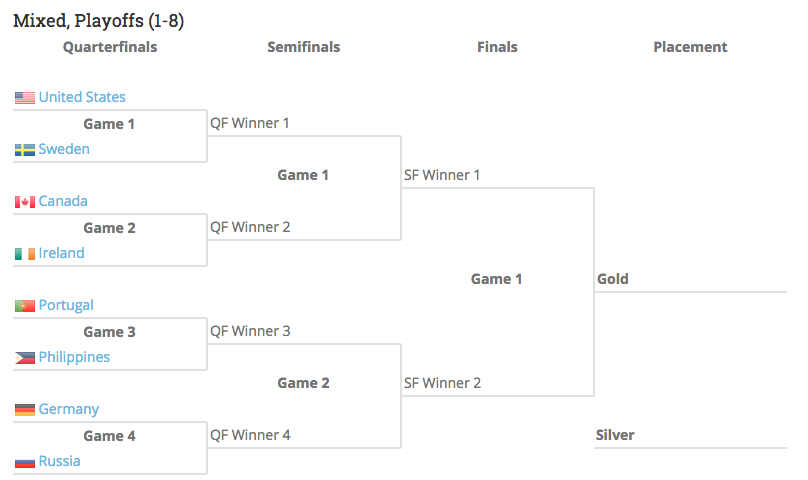 The USA has gone through pools without so much as a hiccup.  It is very hard to imagine a team beating them.  However, their road is paved with challenges.  Though Sweden has lost to the Philippines and Canada, they definitely have shown moments of greatness throughout the tournament.  The Swedes are known for faltering in pool play and still running deep when it counts so don’t think they will be a pushover.  Canada has had a slip ups including a loss to Germany today, but they are learning how the beach game goes and how their teammates play more and more.  I have to predict them moving past a strong Ireland.  Portugal and the Philippines are two totally different teams.  Portugal relying on their all stars to put things away with height and big throws and Philippines playing their classic grinding short game.  Mental toughness may be a factor here, but I give the edge to the Philippines.  Germany and Russia have both had some impressive wins and some tough losses.  I am calling this one too close to call.  If I have to predict how it will all go, I think the USA will defeat the Phillipines in the final to take the gold with Canada picking up bronze, but crazy things have happened at this tournament so far so who knows?

The women’s division only has semi-finals and finals left to go and we have a North American half and a European half.  In the top it has been clear that the USA have been the dominant team in the division so far winning all their games even if a few were pretty close.  Canada have been on the tail end of a lot of sudden death matches, but don’t count them out.  They are also figuring out how to play beach together and they definitely have another gear when it’s all on the line.  I predict USA to take this, but in a very close game.  GB v Russia was a 2 point difference when they met in pool play with GB taking the lead.  I predict that this one is also a repeat giving us a GB vs USA final that USA will take.  However, with the parity here I think that this division is the most difficult to call and if USA is going to mis the triple sweep outside of the Master’s divisions, this could easily be the place where it happens. 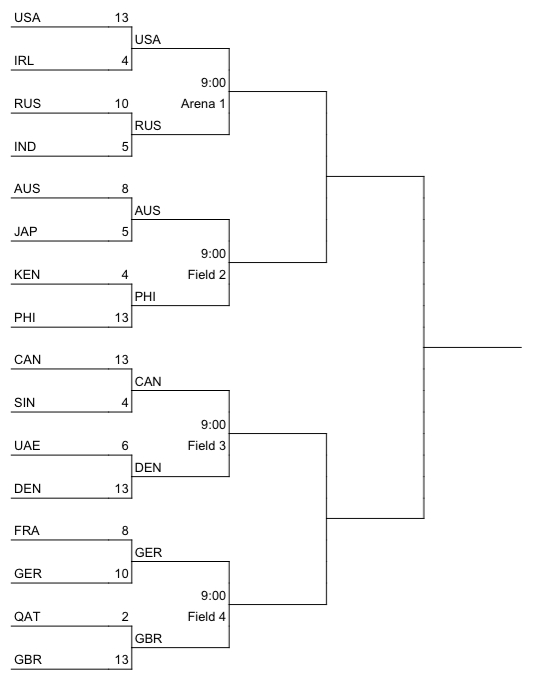 On to open.  There was a bit of a hiccup with the brackets being published, but you can see how it all plays out here.  Though Russia started strong, it seems that they may have run out of steam and have run into some disappointing losses to Kenya and France.  I think the USA will move through these rounds without much problem.  Australia v Philippines is an interesting one as Australia have been steadily improving since their first game.  Another interesting tidbit on this game is that Elliot Trotter has played with the Philippines before so he may have some background on the game.  My dream was to watch the USA play the Philippines so I am picking them but I think it will be close. Down below I think Canada will take Denmark with ease and GB will take Germany.  Semis will be crazy.  What do you think?

This Beach Tale brought to you by Ravi Vasudevan of Get Horizontal. Feature image is courtesy of Scott Roeder from UltiPhotos.com.