WCBU officially kicks off tomorrow, but things are already in full swing with many athletes already here acclimating to the Dubai weather and getting their final practice reps in before putting it all on the line next week.  Walking through the JBR Beach in Dubai I saw all kinds of teams from Canada, The Philippines, Germany, United Arab Emirates all doing things from practice games to spikeball on the official fields.  As I finally move past all the fields and arrive at the arena I see my friends on the Dutch Mixed team warming up in full uniform for a friendly match against the Australian Mixed Masters team, the Hammerheads.  Both teams seemed ready to beat the jetlag and get used to the new conditions by having a well-spirited game against opponents from opposite sides of the world.  This gives me my chance to give my first installment of my #unbiassedreporting coverage of the Dutch National Mixed team (don’t worry, I’ll still cover plenty of the rest of the tournament as well). 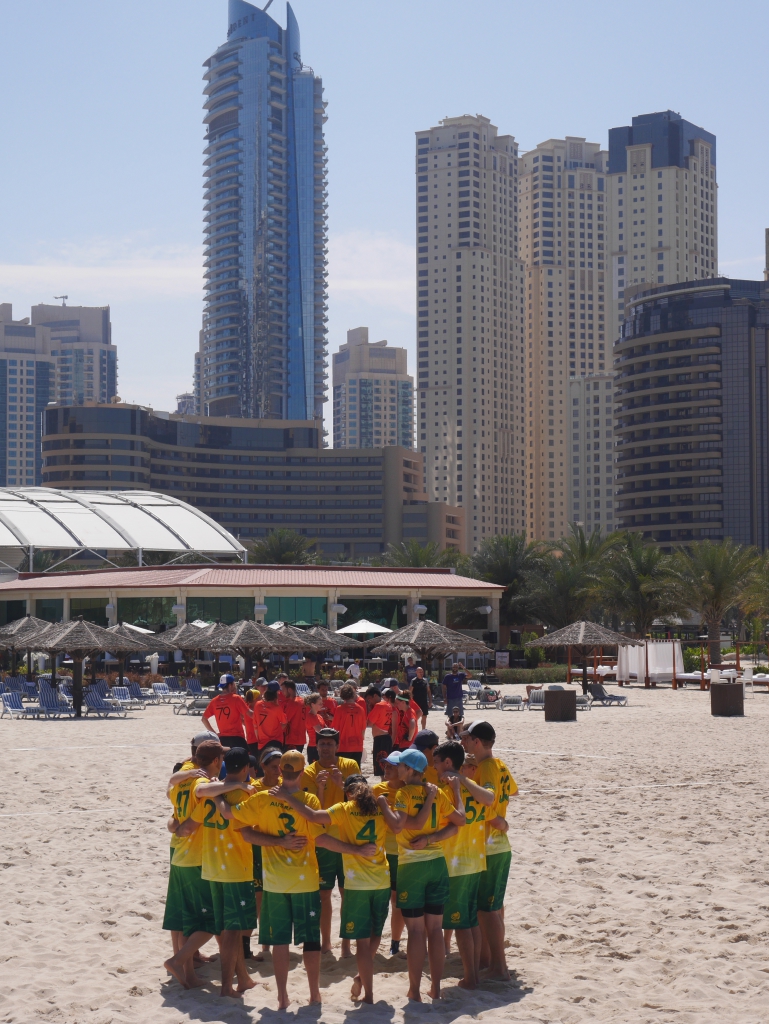 AUS vs NED with the Dubai skyline behind them

The match started off with the Dutch on offense and the Aussies took a quick break after a throw away.  The Dutch quickly came back and within 3 points they were back on serve up by one.  They continued this momentum and broke the Aussies again to take the half 7-5.  After the teams regrouped the Aussies decided to throw out a zone that didn’t work out too well in the first half, but managed to give the Dutch some trouble.  They couldn’t seem to convert point after point and soon they were on the wrong side of a 4 point comeback making it 7-9 for the Hammerheads.  The Dutch were not ready to put their heads down and give up and clawed back to make it 10-10 and since the cap had gone on prior to this, it was now universe point with the older hammer heads starting on offense.  Though they marched the disc up confidently one small error gave the Dutch the chance to put it away and they took that opportunity defeating the Australians 11-10. 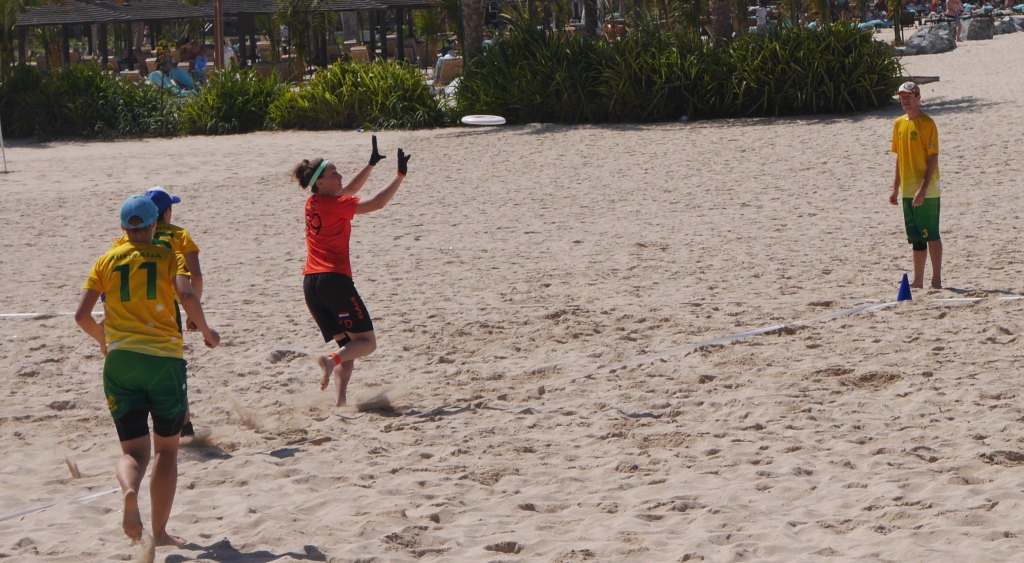 Yvonne Wattez jumping for a score

Spirits were high in the end of the game and both teams seemed really thrilled to have this opportunity to warm themselves up.  Both teams looked a little shaky making more mistakes in the beginning of the match and gearing up for a great universe finish at the end.  Each team had a significant lead at some point in the game it swung back and forth in waves. 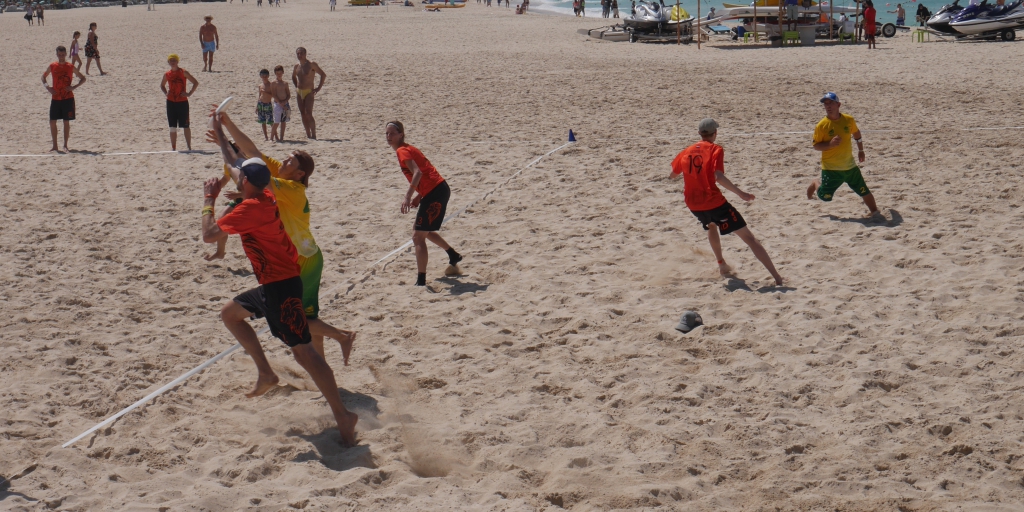 Hammerheads captain John Greenfield told me, “Most of us just got off the plane last night or this morning…. We were happy to get the chance to move from sitting shape to running shape.  Really grateful to the Dutch.  This was a game of runs of 3 and we had just finished our last run before the cap and got the tail end of theirs.  It was nice to play such a tall team that had great break mark throws to test us.” 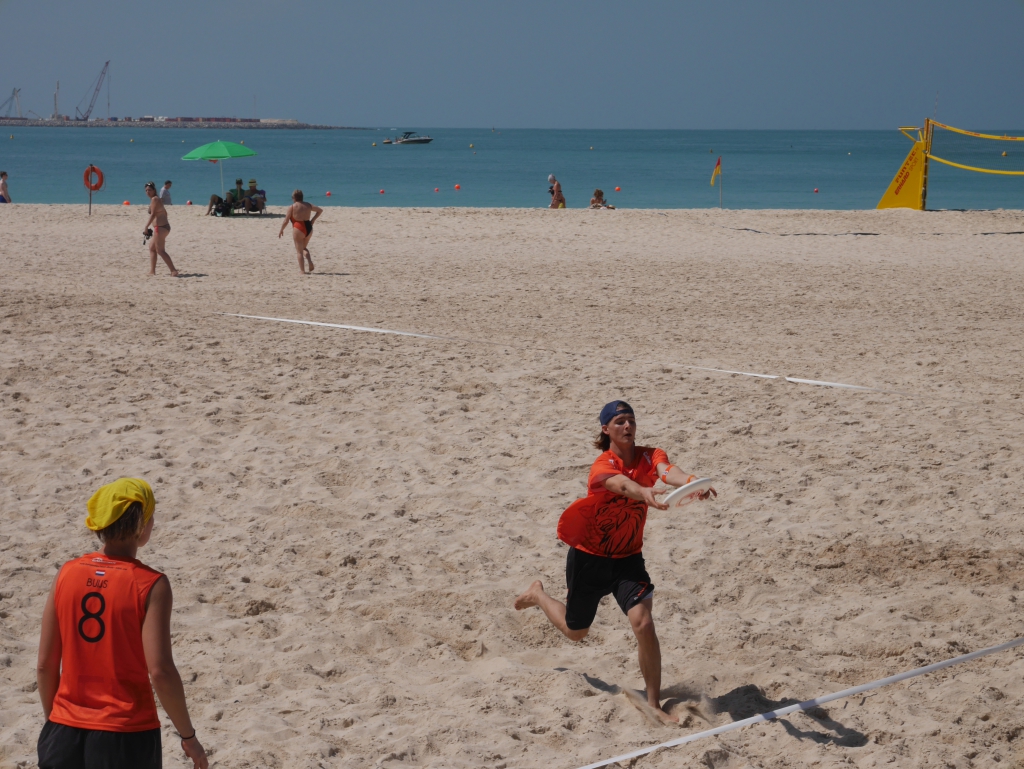 Michiel van de Leur of the Dutch National Mixed Team told me, “We were really glad to be here. We definitely had moments here we could enjoy and build up our confidence.  It was good to play a team that had a completely different style to ours and to practice against a style like that.”  His teammate, Yvonne Wattez, commented that she really liked the spirit and found the Australian Masters really respectful on the sideline.

Some team members moved on to the RISE UP clinic to get in some expert training before taking the day to rest tomorrow and starting the real tournament on Monday morning.  This friendly game is over, but the tension is heating up.  Can’t wait for action to start tomorrow with the opening ceremony and the women’s match up, Germany vs the USA, in the showcase game.  See you there.

Beach tale brought by Ravi Vasudevan of Get Horizontal.  Photos by Claudia Pfeil.